Okay, so you're a bit of a whack-job gadget geek, you read my previous post about upgrading an iomega ix2-200 by replacing the stock drives with SSDs, and now you want to know what sort of benefits might be gained for such a stunt.

Look no further... Here are my results. 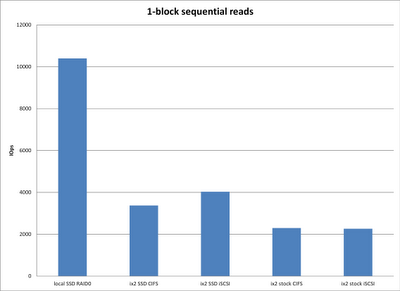 The first chart is meant to make it clear that the improvements in replacing the 5900RPM spinning disk with SSD is marginal compared with the performance of putting the SSDs into a system that can really take advantage of them. Yes, the improvement is there, but the small, 200MHz ARM processor with 256MB RAM in the ix2-200 has nothing on a 2GHz quad-core with 8GB (my home desktop). But if you're interested in this experiment, you already knew that: you want to see how the ix2 fared... 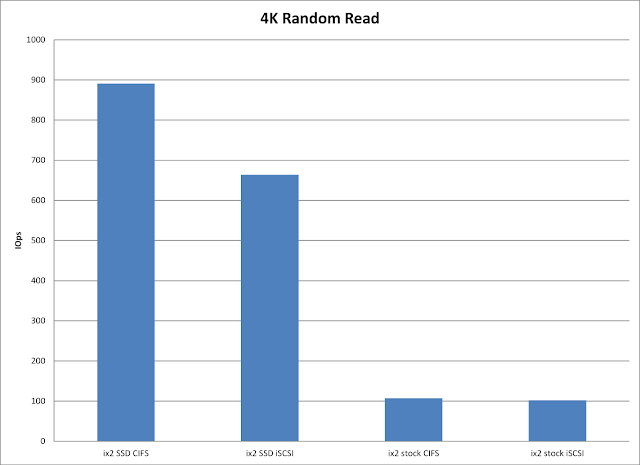 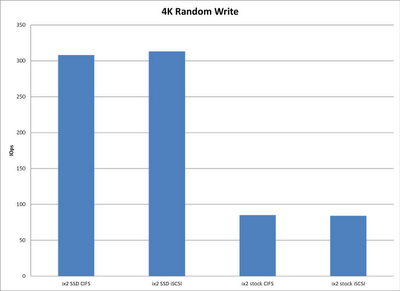 The 4K read/write tests are meant to benchmark the outer-envelope for typical filesystem use: your standard Windows desktop is using NTFS with 4K clusters, so all your I/O is based on these units, whether or not you're actually reading/writing something of a different size. By doing 100% random, any cache in the system is pretty much overwhelmed, giving the real distinction between the two drive types. 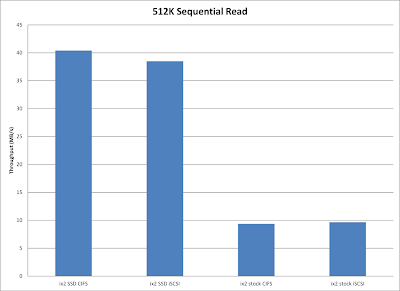 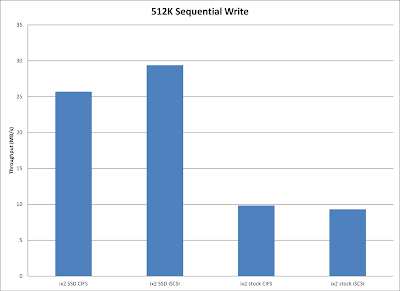 The big-chunk sequential reads and writes represent workload that reflects video streaming (sequential read) or backup (sequential writes). Like the 4K random tests, this sort of workload also gets little benefit from cache and reflects the real throughput of  the drives.

Naturally, the reads fared better than the writes, and it's interesting to see the distinctions between the unit's iSCSI versus CIFS performance. In summary, you can better-than-double the performance of the device through upgrading to SSD.
Posted by Jim Millard at 1:43 PM