Use Synology as a Veeam B&R "Linux Repository"

I posted a fix earlier today for adding back the key exchange & cipher sets that Veeam needs when connecting to a Synology NAS running DSM 5.1 as a Linux host for use as a backup repository. As it turns out, some folks with Synology devices didn't know that using them as a "native Linux repository" was possible. This post will document the process I used to get it going originally on DSM 5.0; it wasn't a lot of trial-and-error, thanks to the work done by others and posted to the Veeam forums.

Caveat: I have no clue if this will work on DSM 4.x, as it wasn't until I was already running 5.0 when I started to work on it.


Once this much is done, Veeam B&R will successfully create a Linux-style repository using that path. However, it will not be able to correctly recognize free space without an additional tweak, and for that tweak, you need to understand how B&R works with a Linux repository...

When integrating a Linux repository, B&R does not install software on the Linux host. Here's how it works:
It does this Every. Time. It. Connects.

One of the files in this bundle (lib/Esx/System/Filesystem/Mount.pm) uses arguments with the Linux 'df' command that the Synology's busybox shell doesn't understand/support. To get Veeam to correctly recognize the space available in the Synology volume, you'll need to edit the 'mount.pm' file to remove the invalid "-x vmfs" argument (line 72 in my version) in the file. However, that file must be replaced within the tarball so it can be re-sent to the Synology every time it connects. Which also means every Linux repository will get the change as well (in general, this shouldn't be an issue, because the typical Linux host won't have a native VMFS volume to ignore).

Requests in the Veeam forum have been made to build in some more real intelligence for the Perl module so that it will properly recognize when the '-x' argument is valid and when it isn't.

So how does one complete this last step? First task: finding the tarball. On my backup server running Windows Server 2012R2 and Veeam B&R 7, it's in c:\program files\veeam\backup and replication\backup. If you used a non-default install directory or have a different version of B&R, you might have to look elsewhere.

Second, I used a combination of  7-Zip and Notepad++ to manage the file edit on my Windows systems. Use whatever tool suits, but do not use an editor that doesn't respect *nix-style text file conventions (like the end-of-line character).

Once you edit the file and re-save the tarball, a rescan of the Linux repository that uses your Synology should result in valid space available results.

One final note: why do it this way? The Veeam forums have several posts suggesting that using an iSCSI target on the Synology--especially in conjunction with Windows 2012R2's NTFS dedupe capability--is a superior solution to using it as a Linux Repository. And I ran it that way for a long time: guest initiator in the backup host, direct attached to an iSCSI target. But I also ran into space issues on the target, and there aren't good ways to shrink things back down once you've consumed that space--even when thin provisioning for the target is enabled. No, it's been my experience that, while it's not as space-efficient, there are other benefits to using the Synology as a Linux repo. Your mileage may vary.
Posted by Jim Millard at 2:44 PM 18 comments: 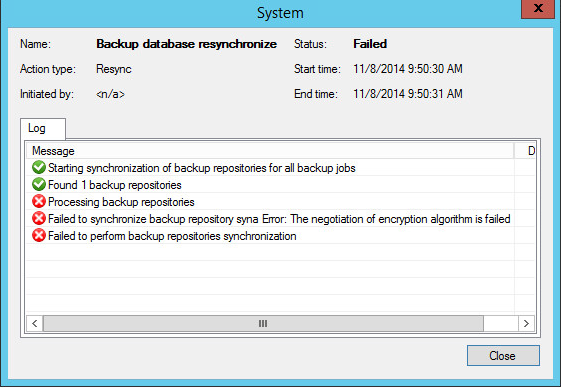 There have been responses of both successes and failures from people using this post to get their repository back on line. I'm not sure what's going on, but I'll throw in these additional tips for editing sshd_config:
Posted by Jim Millard at 10:03 AM 70 comments: